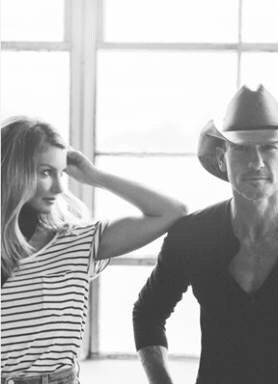 Grammy© award-winning superstars Faith Hill and Tim McGraw have been announced as the first headliners for Country to Country 2018 and will be bringing their highly acclaimed and record setting Soul2Soul tour to this year’s event. The official C2C 2018 launch event will take place on Friday 6th October at London Bush Hall with BBC Radio 2’s Bob Harris exclusively unveiling the line-up.

Faith Hill and Tim McGraw have been dominating the music charts since the early ‘90s. They began touring together in 1996 on McGraw’s Spontaneous Combustion tour. In 2000 they created the Soul2Soul franchise with their record-breaking “Soul2Soul” tour, becoming that year’s top grossing and most successful U.S. tour. Their success continued in 2006-2007 when “Soul2Soul II” returned to the road, which was the most attended tour of the year in any musical genre and remains the highest grossing multi-year North American tour in country music history.

Faith Hill is one of the top-selling and most-awarded female artists of all time with 5 Grammy Awards, 12 Academy of Country Music Awards, 3 Country Music Association Awards, 4 Billboard Music Awards, 4 American Music Awards and 4 People’s Choice Awards. She has consistently broken chart records with her #1 singles and has had major crossover success with the hits “This Kiss,” “Breathe,” “The Way You Love Me,” “Cry” and “There You’ll Be.” She has had multiple albums top both the Billboard Top 100 and Country charts simultaneously and with only seven original studio albums, has sold more than 30 million albums worldwide.

Tim McGraw who headlined the very first Country to Country festival in 2013, has sold more than 50 million records and dominated the charts with 43 worldwide #1 singles. He’s won 3 Grammy Awards, 16 Academy of Country Music Awards, 14 Country Music Association Awards, 11 American Music Awards, 3 People’s Choice Awards and numerous other honors. His iconic career achievements include being named the BDS Radio’s Most Played Artist of the Decade for all music genres and having the Most Played Song of the Decade for all music genres. He is the most played country artist since his debut in 1992, with two singles spending over 10 weeks at #1.

Faith Hill and Tim McGraw will be joined by a whole host of multi-platinum and acclaimed artists across the weekend.

The launch event at Bush Hall is part Country Music Week’s New Country US Night featuring; Logan Brill, Temecula Road, Levi Hummon and Walker McGuire. To be part of the action tickets are onsale now via http://www.axs.com/uk and http://www.CountryMusicWeek.com.&nbsp;

C2C is Europe’s biggest Country Music Festival. It brings three days of the best country music and programming with performances from the world’s best country stars as well as emerging talent from Nashville, UK and Europe. Country to Country is now entering its sixth year with ever increasing popularity and for the first time and due to popular demand, C2C Glasgow will take place at The SSE Hydro having out grown the Clyde Auditorium.

I moved to America when I was 10; Lawton, Oklahoma to be precise. It was there that I fell in love with country music. My parents were fairly sure I'd grow out of it when we moved back to England, but that was 5 years ago now. I'm fairly sure that I was born in the wrong decade. I like real country music, I agree with Merle Haggard when he said that he knew that Elvis was a real man because he could hear him breathe on his records. Classical music makes me feel like I should be a better person, but country music allows for flaws. I've been writing music since I was eight, and I can't make music like Merle Haggard or Elvis, but I'm working on it... View all posts by PhillyStock